Jesuits and Education in India

The Society of Jesus, a Christian Religious Order founded by Saint Ignatius of Loyola in 1540, has been active in the field of education throughout the world since its origin. In the world, the Jesuits are responsible for 3,897 Educational Institutions in 96 countries. These Jesuit Educational Institutions engage the efforts of approximately 1,34,303 teachers, educating approximately 29,28,806 students. In India The Society of Jesus has founded 118 Primary & Middle Schools, 149 High Schools, 58 University Colleges, 22 Technical Institutes and 16 Business Administrations Institutes with 11,525 teachers, educating 3,34,538 students, belonging to every social class, community and linguistic group. This Institutions are part of the Catholic Church’s effort to share in the country’s educational undertaking. The Jesuit College aims at the integral, personal formation of youth, to accomplish this, special efforts are made:

The Jesuit College thus aims at making its own contribution towards a transformation of the present-day social condition so that principles of social justice, equality of opportunity, genuine freedom, and respect for religious and moral values, enshrined in the constitution of India, may prevail, and the possibility of living a fully human existence may be available to all. 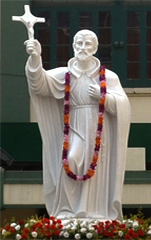 The Indian mission of the Jesuits lies at the very origin of their Order. It is to India that Ignatius of Loyola, the Founder of the Society of Jesus, sent his greatest son, Francis Xavier. Xavier was a zealous “missionary on the move”. He constantly traveled along the Fishery Coast, then west, into Marava country, then to Mylapore (present day Chennai).

He sailed to Malacca and Japan in 1549 where he spent two and a half years. In April 1552 he sailed to China via Malacca from Goa, never to return alive. He died at Sancian, a small island facing China, on the 2nd of December of the same year. Wherever he went, he plunged himself into charitable and pastoral work preaching the message of God’s love to people. He worked in India for ten years, from 1542 to 1552, it is called the Xaverian decade.

The Crest of St. Xavier’s College is modeled on Jassu Crest of the College Patron Saint Francis Xavier’s family. It has been adapted to local surroundings, suggestive of a native flavour of a College in India. The escutcheon in white and blue contains a tiger and a palm tree, overlooked by a silver crescent moon, which symbolizes the palacio of Xavier. The charge on the Dexter, HIS, bespeaks a College of the Society of Jesus (Iesus Hominum Salvator – Jesus, Savior of Human Family). The checky argent and sable in the base recall the spirit of the Xaverian family. A garter bearing the words “St. Xavier’s College, Calcutta”, encircles the escutcheon and it is surmounted by a Cross emanating holy rays. A scroll passes underneath inscribed with the words Nihil Ultra (Nothing Beyond), the motto of the College. The Crest signifies dignity, courage, quiet gleam and the call of the beyond – the quest persists towards higher endeavour.

A Christian Minority Higher Educational Institution, St. Xavier’s was founded in 1860 by a Catholic Minority Religious body, the Society of Jesus, and was affiliated to Calcutta University in 1862. While preference is shown to the educational and cultural needs of the Minority community, admission is open to all irrespective of caste, creed and nationality!