The Sports Department of the College is active year round and students are encouraged to participate in the numerous Intramural and Extramural sporting activities which the Department schedules for them. The rush of entries for fiercely contested Inter Department Tournaments and the stiff competition to make it to the College teams shows the enthusiasm and interest of the students. Nearly twenty two College teams play competitive sport at the University and State level. The Department continually challenges the students to scale greater heights and bring glory to the College.

The College sends teams for most of the Inter College tournaments conducted by Calcutta University and other prestigious Inter College tournaments where our teams perform credibly bringing back numerous awards. A large number of students represent Calcutta University in various games and sports each year. Our Students win medals at the East Zone and All India Inter Varsity tournaments. Among others in the recent past, it is with great pride that we acknowledge one our students representing the All India University team at the World University Rowing Championship held in Shanghai, China in 2019.

Under the auspices of Education Directorate, Department of Higher Education, our College was selected as Host College for the Government of West Bengal Inter College State Sports and Games Championship 2019-20. A large contingent of Staff and students oversaw the smooth conduct of the event at Sports Authority of India Eastern Region from 19-29 February 2020.

The Department conducts on an average of twenty-two Inter Departmental Tournaments for Men and Women on and off the campus. Participation is extremely high and top honours are keenly contested for. Each year the College Annual Sports is held in the month of February. This mega event is closely contested and participation of Staff and students for Championship and Special Events is always high. The Students’ Inter Departmental Parade is a unique feature of this event and each Department of the College vie enthusiastically to win the awards for the Most Attractive Departments and Highest Attending Contingents.

The Sports Department looks forward to newer challenges and goals which meet the aspirations of the students. Our College Men and Women’s Rowing team have won numerous medals in the last two years in the Inter College Regatta conducted by Bengal Rowing Club. Two nascent College teams of Men’s Rugby and Women’s Football have taken shape and have joined our other nearly twenty SXC teams in competitive Sport. A number of our students have represented West Bengal in various National and International level tournaments.

Be it an avenue for recreation or a platform to showcase their talents, the playing fields of SXC is where everlasting bonds have been forged. Sport is a unifier and students from all departments come together to play under one flag, for one institution.

Our students give a lot of time and energy towards putting up formidable College teams for all tournaments which we participate in. Students are given professional coaching in Cricket, Chess, Hockey, Basketball, Football, Table Tennis and Volleyball.

The Sports Department rose to the challenge during the pandemic organising numerous online events, training programmes and seminars for the students. An active schedule for the students kept the students positively engaged and productive. Students can email the department at directorsports@sxcal.edu for any information or assistance.

A large number of students accumulate their Extracurricular Credits through Sports. An enthusiastic band of students under the able guidance of three Student Sports Secretaries run the Department daily and the Sports Calendar of the College is packed with events for the students. Students who play sport at the District, State or National level are advised to inform the Sports Department of their participation. The College each year has an Awards Ceremony especially for Sportspersons who have outstanding performances and the Sportsperson of the Year award is highly coveted for.

All students are advised to read the Sports Notice Board regularly for current events, fixtures and information. Students who are interested to participate in Sports and Games or work in the Department can come to the Sports Office which is Room No-1 on the Ground Floor.

FOR ANY QUERIES AND INDIVIDUAL SPORTS ACHIEVEMENTS, STUDENTS ARE REQUESTED TO PLEASE EMAIL WITH YOUR NAME DEPT SEM AND ROLL NO. TO directorsports@sxccal.edu

DEPARTMENT OF SPORTS
“The only way to do great work is to love what you do.”
*St. Xavier’s College (Autonomous) Kolkata Department of Sports* welcomes all the sports enthusiasts planning to make a career in the fields of sports and fitness to a seminar on *”Careers in the field of Physical Education, Sports, and Fitness Industry”*
This seminar will be conducted by *Mr. Shatadru Lawrence Dutt* (MD and Co-founder, Millennial Sports LLP) and *Mr. Anuj Kichlu* (Director and CEO, Best of You Sports).
Date: *1st February 2022*
Time: *7:30 P. M.*
Participants willing to attend can watch the broadcast live on *SXC CAL SPORTS*
Link: https://youtube.com/channel/UCLLSuFjnBvK3PqT_wERU20w
*Participants will be getting 5 hours of Non-Academic Credits on successfull fill-up of attendance form that will be sent on the livestream chat section* 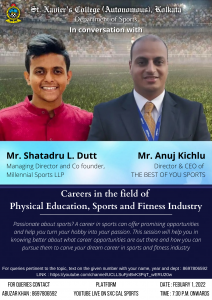 Notice from Dept of Sports